Bitch puppy by FinW-07 Sofus Footlights, out of Funny Girl Of Black Mirage who has just left us. I wish her new owner many happy moments with this black baby !! 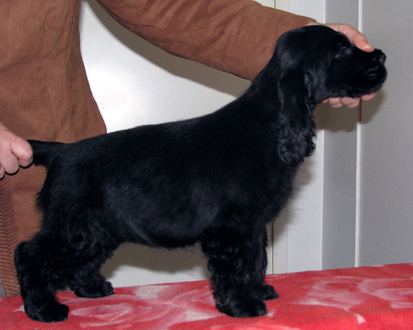 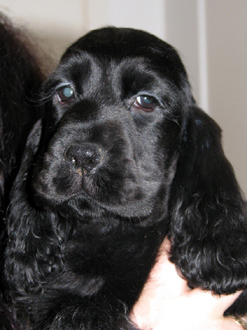 The breed- & group judge was Mr Cristian Vantu from Romania. 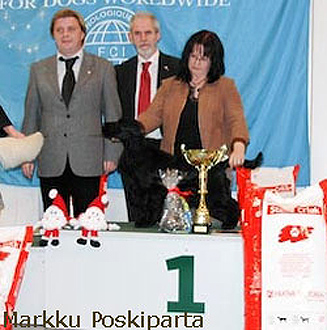 My old-boy-Elton, Int Ch XXL Of Black Mirage, delighted us by winning BOB, BOB-veteran, BIS4-veteran and can now add one more title, FINNISH WINNER 2008, to his long list of titles.
He had his 10th birthday couple of days ago, so I think this is quite a big win for a dog of his age. 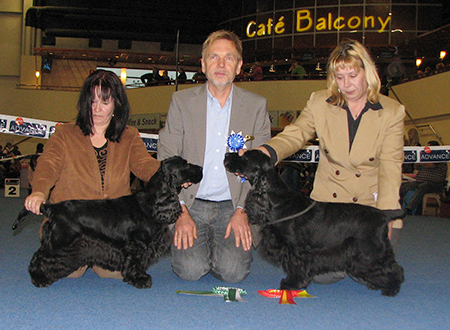 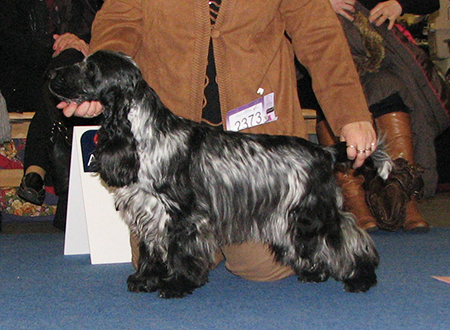 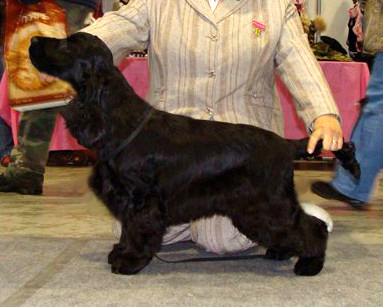 We like to present you Elton’s son Usemade Expect Some Fun. We have found him maybe the best male puppy by Elton in Finland. Is he the one who can follow his father’s footsteps in the show ring or are the boots too big to fill in ? Time will tell….. 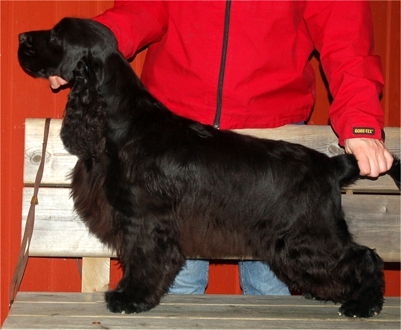 Today I received a confirmation from FCI – Ch. Shavian No Mercy is officially INTERNATIONAL CHAMPION !!

Our miniature dachshund “Sedu” Mini Golf Zedex was in his first puppy show and the result was just great – BOB- & BIG1 puppy !!! Mini Golf Baguette was 2nd best bitch puppy. The breed- and group judge was Mr Unto Timonen. 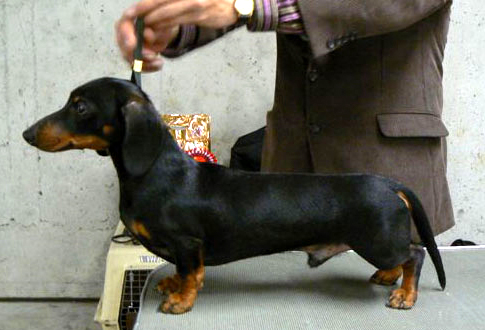 He arrived today and has already stolen our hearts with his very outgoing & loving temperament. He is co-owned with Kati Salo, kennel Two Pine’s. 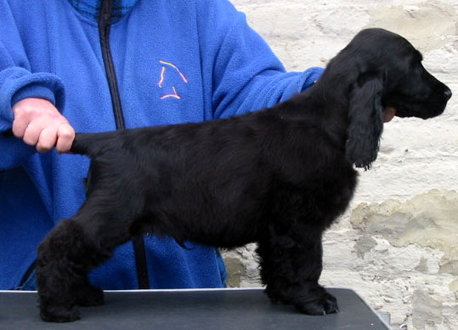 Int Ch XXL Of Black Mirage 4th best male, BOB- & BIS4 veteran. He had also BOB- & BIS2 progeny group.
Ch Shavian No Mercy won the champion class and ended up as 2nd best bitch.
Our sweet little Yabba – Bleper’s Yabba-Dabba Doo was in her first show at the age of 9 months and she won a big junior class (16 entries).

BOB and finally also BIS was XXL’s young son, Great Escape I’m With Stupid – congratulations to his breeder and owner !!! 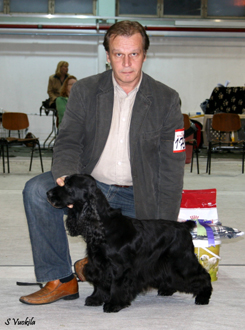 I received today lovely photos of Shavian Four Bells owner kennel Francini’s, Italy. Four is spending some holidays in France in Séverine Cottebrune’s, kennel Of Merrily, much caring home. Thank you Séverine for these photos. 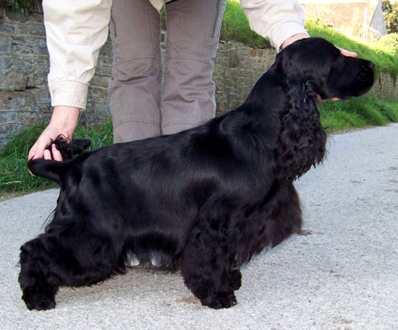 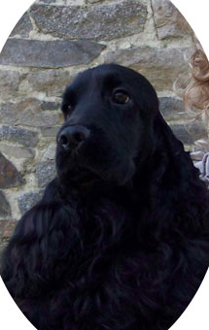 The breed judge was Mrs Kirsti Louhi and group was judged by Mrs Natalja Nekrosiene from Lithuania.

The breed judge was Mrs Inga Siil from Estonia. 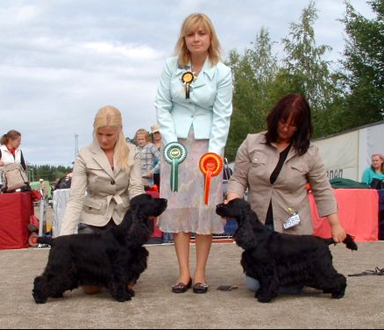 Shavian No Mercy and XXL Of Black Mirage in Kuopio 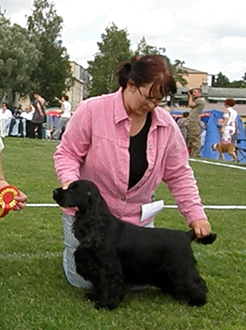 FinW-07 Shavian No Mercy was BOS.

The breed judge was Mrs Diana Fenton from Australia.

The breed judge was Mr Jo Schepers from The Netherlands and BIS veterans was judged by Mrs Martha Heine from Germany.

The breed judge was Mr Igor Selimovic from Croatia.

The breed judge was Mr Tino Pehar from Croatia. My sincere thanks goes to Ms Sanna Vartiainen who was handling Elton in the BIS veteran competition..

Shavian No Mercy was best bitch with cacib. She was also BOB and 3rd in the group. 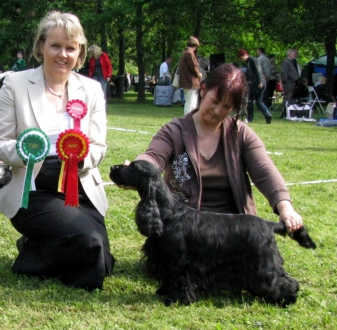 Old-boy Elton was the one who again made my day – he was 2nd best dog and BIS veteran. He had also BIS progeny group.
Our breeders group was 2nd.

Congratulations to Elton’s kids as they took BIS & BOS puppy titles. The puppies and males was judged by Mr Michael Gadsby (Afterglow). 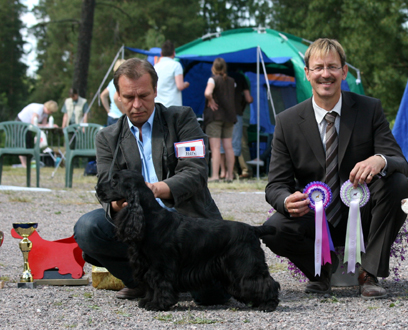 The breed judge was Mr Piotr Krol from Poland.
This time Diego was handled by my friend Mari, thanks, You made my day !!

Our sweet little Renttu – Trend Vom Golf, 10 months old dachshund, was today in his second official show and the result was just brilliant – he won junior class with Excellent, he was best dog with CC and ended up as Best Of Opposite Sex.

Bravo Renttu, bravo. Sincere thanks goes to his co-owners Vesa & Juha who kindly took him to the show today and Vesa was handling him close to perfection. The breed judge was Mrs Lisbeth Campbell from Norway. 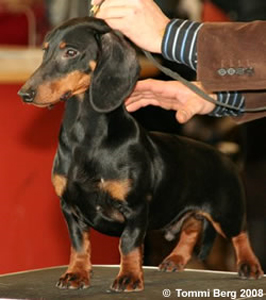 Let me show you

how Two Pine’s Trionfo D’amore has matured. She is by Int Ch Francini’s Encanto Latino. Not bad, not bad at all…. Proud breeder & owner kennel Two Pine’s. 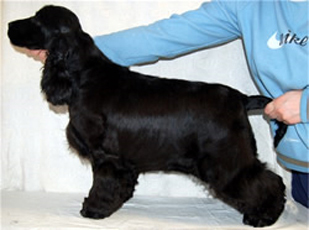 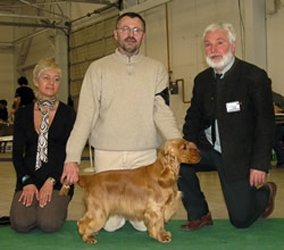 The breed judge was Mr Theo Leenen from Belgium.

May I introduce you Shavian As Promised

owner Petr Studenik, kennel Black Petrs. “Fin” is Optigen PRA-prcd Normal/Clear and he has A hips.